As generations of students graduate from Western Illinois University, they not only develop a love for the purple and gold of their alma mater, but some leave after finding something more romantic. Every love story that began at Western is part of the University’s rich tradition and rich past.

While WIU students come to campus with the goal of earning a college degree, three generations of an alumni family have found the love of their lives on campus.

The Crain family began attending WIU in the 1920s, when the late Francis “Pete” Crain met his wife, the late Belva Wedding, on campus. Both graduated in 1929 and later became teachers. The couple later married but had to keep their relationship a secret from the start as female teachers were not supposed to marry during this time.

The couple’s son, the late Richard “Dick” Crain, came to WIU following in his parents’ footsteps, where he met his wife, the late Susie Sears. Dick earned a degree in chemistry in 1956, and became a pioneer in the anti-pollution movement and designed over 100 pollution abatement facilities. In 2010, he received the WIU College of Arts and Sciences Distinguished Alumni Award.

Dick and Susie’s son, Scot Crain, met his wife, Elena Andree at Western. Scot earned a BA in English in 1979 and completed his MBA at WIU in 1982. 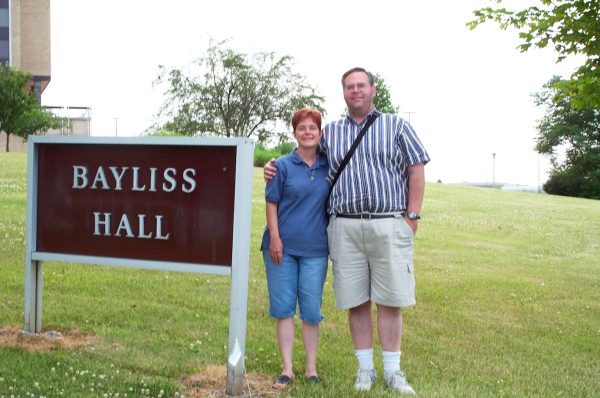 Scot and Elena, pictured where they first met and worked together, on campus.

While on campus, Scot was assistant ward director at Henninger Hall and Elena was women’s ward director at Bayliss Hall. The couple worked together at WIU, became good friends and stayed in touch after leaving Macomb for another job. They then began dating and married in 1985.

As Valentine’s Day approaches, WIU celebrates the people we love. We’d love to hear about your #LeatherneckLove story. Was there a person, event or class that made you fall in love with WIU? Did you meet your partner at Western and now your kids are on campus? Show your support for one or more WIU programs you love at wiu.edu/give.

Sean Leary is a writer, director, artist, musician, producer, and entrepreneur who has been writing professionally since he started at age 11 in the pages of the Comics Buyers Guide. A graduate with honors from the master’s program at the University of Southern California, he has written more than 50 books, including the best-selling books The Arimathean, Every Number is Lucky to Someone and We Are All Characters.